EU-28: Expected rebound of citrus production may reduce imports for 2018/19

EU-28: Expected rebound of citrus production may reduce imports for 2018/19

EU orange production is concentrated in the Mediterranean region. Spain and Italy represent 80 percent of the EU’s total production of oranges. The remaining 20 percent is distributed among other Member States (MS), such as Greece and Portugal.

For MY 2018/19, EU-28 orange production is forecast at 6.5 MMT, 3.8 percent higher than MY 2017/18. Larger production expected mainly in Spain and Portugal is due to favorable weather conditions because of a good flowering, rainy spring and mild summer that facilitated a good fruit setting. 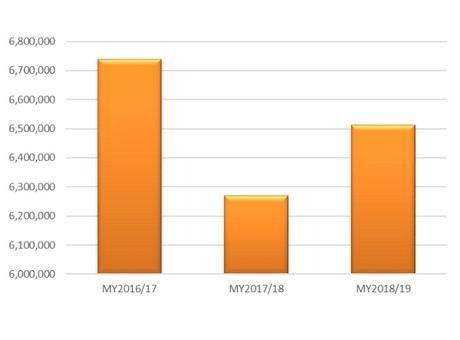 Orange Production in EU-28 by MY (in Millions of Tonnes)

Italy is the second largest European lemon producer after Spain. Sicily is the main lemon-producing area, accounting for 88 percent of domestic production. Femminello Siracusano, Lunario,  Interdonato, Limone di Sorrento, and Limone di Procida are the leading lemon varieties grown in the country. Italy’s MY 2018/19 lemon production is forecast to decrease 8 percent compared to the previous year due to hailstorms occurred in the spring. However, quality is forecast to be excellent. 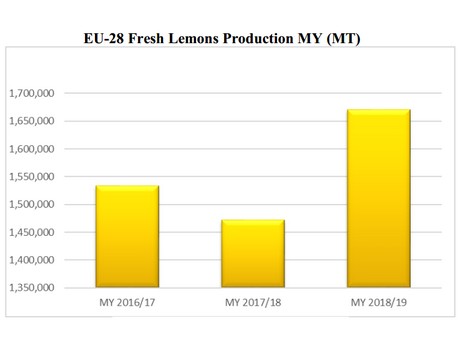 Greece’s MY 2018/19 lemon production is expected to remain flat. The main lemon-producing areas include the prefectures of Achaia, Korinthos, Crete, and Laconia, located in southern Greece. The major lemon variety grown in Greece is Maglini, whose fruit is strongly aromatic, with quite a bitter juice. It has a thin, shiny peel and when fully ripe has a yellow color. The early varieties Interdonato and Eureka are also grown in Greece.