The main supplier of table tomatoes for Italy is the Netherlands with over 114,000 tons of produce exported. Italy’s main destination is  Germany with over 61,000 tons (2018 data). As regards medium term forecasts, it is estimated that table tomato imports to the EU should increase by 0.4 percentage points every year. In this scenario, Morocco is where 72% of total Community imports are from (see slide below). 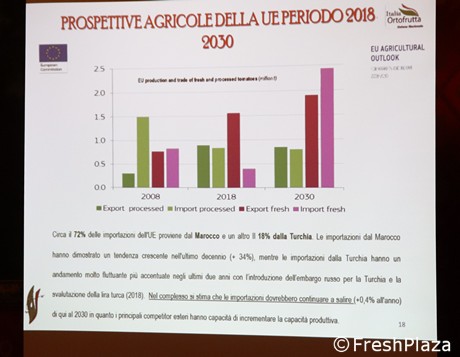 These are a few of the data points which emerged during the “Tomato Contact Group” featuring the Spanish, Italian and French delegations. It met in Ragusa on 4th and 5th April 2019 thanks to Carmelo Firrincieli from OP Valleverde and with the support of Mipaaft, represented by official Roberto Cherubini.

Massimo Pavan started by saying that “Table tomatoes from Morocco are a problem in winter as they drive our prices down, yet something is changing and it seems they are growing fewer tomatoes in favor of soft fruit. At the same time, there are more and more technological greenhouses in northern Italy, Germany and various Eastern European countries. This means that, over the next few years, we will export less and less as consumers tend to prefer local productions.”

Vincenzo Falconi, director of Italia Ortofrutta, presented the data concerning the 2018/19 campaign. In 2017, table tomatoes were cultivated on approximately 25,000 hectares (greenhouses and open fields, the latter exceeding 70% for almost 1 million ton in total). Sicily produces 45% of the domestic total (see slide below). 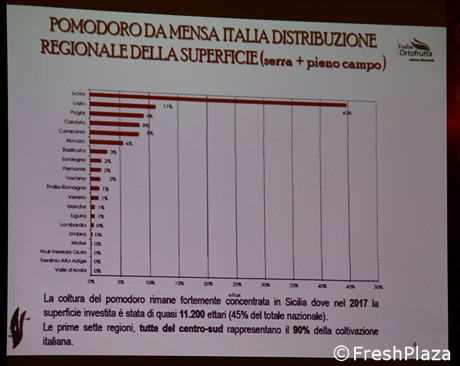 Luis Martin from Fepex, the Spanish Federation of producers and exporters, assessed the situation in Spain together with D. Antonio Flores and Irene Costa Landera from the Spanish embassy in Italy.

In 2018, Spain produced 1.6 million tons of winter produce, while the summer product reached 600 thousand tons. Over the past four years, the cultivation of smooth round tomatoes dropped in favor of smaller ones. Winter tomato crops cover 14,000 hectares in total, while summer ones cover 8500 ha. Exports drop from October onward as the produce from Morocco becomes available. 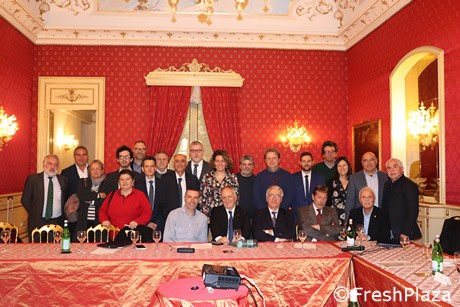 Group photo with the three delegations

Laurent Bergè from AOP Tomates and  Cocomber de France discussed the French market reporting that it is “substantially stagnant with 950,000 tons consumed and 550,000 tons produced.”

“50% of the French production is made up of smooth round tomatoes, while the rest is made up of cherry tomatoes and specialties. French crops cover an undefined area, but one that grows by 2-3% every year and 98% of which is in greenhouses. Over the past two years, more and more foreign producers from Belgium and Holland have been moving in for the winter tomato production. The worry is that the tomatoes grown in these countries are sold as French and in various cases producers have been fined.”