US growers harvest an increasing amount of organic tomatoes

US growers harvest an increasing amount of organic tomatoes

Fresh tomatoes have remained a staple in American kitchens even as consumer tastes and preferences evolve. For example, producers have responded to consumer demand for more organic produce by cultivating more organic tomatoes.

From 2008 to 2011, consumer price sensitivity coupled with the higher price of organic produce (relative to conventional produce) contributed to the decline in both demand and production. During that time, organic tomato acreage fell approximately 32 percent to 6,000 acres in 2011. However, after 2011, organic tomato prices and harvest areas began to rebound, spurring production to grow by 50 percent from 2011 to 2015. 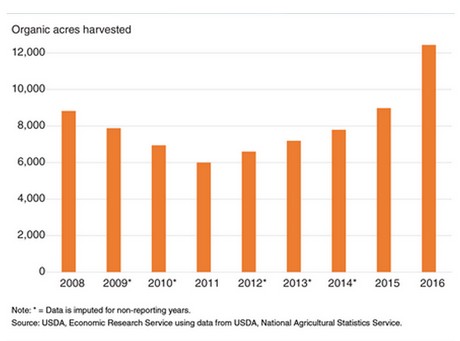 From 2015 to 2016, acres harvested of organic tomatoes grew by another 39 percent to reach record levels -12,400 acres in 2016. Between January 2013 and January 2018, average advertised retail prices for round organic tomatoes (excluding Roma and cherry varieties) were $1.43 per pound—over 60 percent higher than their conventional counterparts at $0.89 per pound.

This chart appears in the ERS Special Outlook Report, “Unpacking the Growth in Per Capita Availability of Fresh Market Tomatoes,” released in March 2019.